Varun Dhawan Wraps Up Bawaal Shoot: The shooting of Varun Dhawan and Janhvi Kapoor’s upcoming film ‘Bawaal’, being produced under the banner of Sajid Nadiadwala under the direction of Nitesh Tiwari, has ended. Actor Varun Dhawan gave this information by sharing a video on his Instagram. Although Varun and Janhvi used to constantly share videos and photos of foreign shoot locations on their Instagram handles. The cute bonding of both was clearly visible on social media.

Varun shared the video and wrote, ‘We have created a ruckus! Wrapping of the film in Ajju Bhaiya style! On 7th April 2023 there will be next uproar in theaters!’ Before Varun, the film’s actress Jhanvi also shared an emotional note on her Insta. In which Jhanvi told that it was like a dream for her to be a part of this film, she feels very lucky. 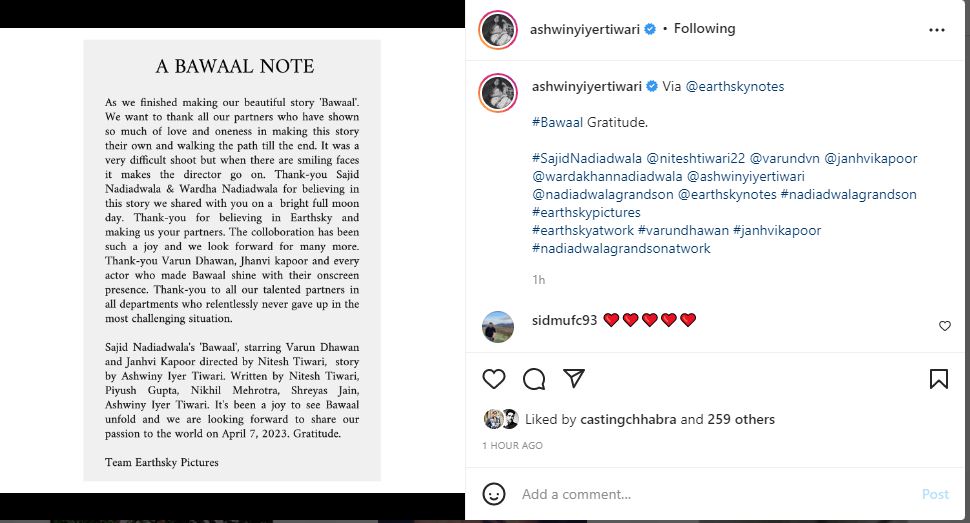 Janhvi also thanked Varun Dhawan and said, “Thank you…for taking care of me and for everything you did for me.” Even if we don’t agree on each other’s point of view. Sometimes we tease each other. But let me tell you that Nisha will always be in Ajju’s team and will always find hotels for you that have salmon tartar and grilled chicken. I can write an essay on this entire team, who have made this film so special. But there is a limit of words here. But the truth is that I am missing everyone a lot. Thank you for making my three months special.

Let us tell you that Varun and Jhanvi are sharing the screen for the first time. Fans are very excited to see both of them together. This intention of the fans will be fulfilled soon, this film will be released in theaters on 7 April 2023. Baal is the most expensive film of Varun’s career so far.